If you’re into collecting awards for QRP operating, consider stopping by a new QRP ARCI site just set up buy Julian – AK4VL. He’s done a very nice job of creating a web page that allows quick efficient data entry for claiming QRP operating awards. Currently, the site is set up for Kilometers Per Watt (KMPW) award. So, if you’re running 5w or less and QSO with stations over about 5,000 Km away (regardless of their power) you can stop by Julio’s site, enter you QSO data and submit the information for an award through QRP ARCI.

He’ll be adding interfaces for more awards soon. Stop by and have a look. He’s done a very nice job.

Julio is also the creator of the HAMjitsu QRP site.

I watched the 2012 movie adaptation of the 1947 documentary, Kon Tiki, made by Thor Heyerdahl of his famous balsa wood raft adventure from Peru to Polynesia. The movie was nominated for an academy award and it’s easy to see why. Very well done with some amazing special effects work. I had no idea that for the trip, Heyerdahl’s crew included not one but two radiomen! The film shows the radio receiver, key and headphones used. I wasn’t able to determine the receiver manufacturer, but it looks like they used a J-38 key. Power seems to have been provided by a crank-powered generator of some kind.

During the crossing the movie includes several scenes of the radiomen struggling to get antennas working. In one scene they attempt to get an aerial in the air with a balloon even. Ultimately they appear to have settled on a simple long wire hoisted up along the mast.

The radio is used to report their position during the journey and when they ultimately reach Polynesia you hear the sounds the the BBC coming from the radio and see one of the radiomen cranking the power generator.

It seems likely this would have been a QRP operation start to finish.

The movie is definitely worth watching. I caught it on Netflix.

On the evening of July 28th I took a short drive from Moscow, Idaho to Roundtop Park in Pullman, Washington where I set up my S9 vertical against a very tall pine tree, hooked up half a dozen radials across very dry weeds and ground, and then fired up my KX3 on 20m.

Here are a few photos from my setup on Roundtop at about 7pm local time.

This is the sign at the entrance to the short trail leading to Roundtop. 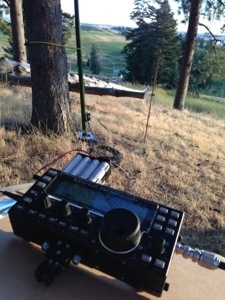 Here’s the KX3 with the S9 just beyond overlooking The Palouse on a beautiful Pacific Northwest evening.

Conditions at Gray Line time on 20m were very good. Lots of DX activity including Brazil, Russia and Sweden. I was able to work 2 Russian hams and another ham in Belarus. I was running about 3W on CW.

I was impressed considering the radials were, for the most part, not even touching the ground. Proving once again that it doesn’t always pay to get too hung up on all the technical details with antennas and radials.

The propagation gods were smiling down, no doubt!

The June 2013 issue CQ Magazine features a great article entitled, “Parking lot and dining room antenna ideas.” In the article, Dave – NF0R – talks about his St. Louis Micro Loop II antenna built from an aluminum bicycle wheel and an air variable capacitor. This magnetic loop is highly portable, light and requires no assembly for trail operation, especially if you’re already on a bike! I plan to set mine up for quick mount/unmount on my rear bicycle rack.

That said, I plan to use my Micro Loop for fixed and mobile operating. I ordered an air variable capacitor from Crystal Radio Supply in Texas and plan to use the aluminum front wheel of my Dad’s old 10-speed touring bike for the loop portion of the antenna.

I’ll post updates later after construction and testing are completed.

Took a short trip to a small, local pond on the east side of Moscow, ID to work the museum ships weekend.

I brought my KX3 and SV9 40-10 vertical and set up a few feet from the pond, close enough to see the fish and baby ducks swimming by.

Condx from my home QTH were not good so I wanted to see what a change of location and antenna might do.

I did work NB6GC – The USS Hornet – in Bend, Oregon. Also heard two other museum ship sites but could not reach them: NI6BB – The battleship Iowa – and N5P – The Museum of the Pacific War – In Fredricksburg, TX.

Band conditions improved greatly at the pond, with 40m going from S9+ QRN to about S4 QRN. Across the rest of HF land QRN was S1 or less. Unfortunately a weekend geomagnetic storm really tamped down propagation from the Idaho panhandle.

Also heard VE3 CWM – The Canadian Cold War Museum – which is actually a real Cold War bunker 100 feet underground, designed for key people in the government to remain in for up to 30 days on the event the unthinkable ever happened. The bunker was officially closed nearly 20 years ago so now it’s just a tourist attraction of sorts. Wish I could have worked them but, no luck today.

Still it was great fun to be outside on the air. Setup took just a few minutes.

Next time I hope propagation is better – heard a few other stations comment on the marginal band condx.

Here are some pix from the operating position.

The SV9 is up against the tree. I ran four 20-ft radials off the grounded plate at the foot of the SV9.

The view from my seat, pond-side. That’s my battery pack on top of the KX3. If you look carefully you can see two ducks swimming by.

Here’s the welome sign to the park, with my setup in the distance on the left.

N7RCS
Create a free website or blog at WordPress.com.