A few weeks ago I created a front panel for a kit I built in December 2012. The kit is a QRP Transmit/ Receive box designed by the 4-state QRP club.

Below are before and after photos of the front panel. The first photo is my attempt to drill out holes in an enclosure i purchased from Ten-Tec based on the template provided with the kit. I really lacked the proper milling tools to do the job and, needless to say, it shows.

I learned that I should have allowed a bit more room for panel openings as the position of components on the board was slightly different than my front panel specifications. I had to enlarge two of the openings using a Dremel bit to adjust for two jacks whose position was slightly off from my specifications.

In addition I learned that I should have positioned my labels a farther from the openings as the connector fasteners tended to overlap my labels somewhat.

All in all I think this was a very successful first attempt. 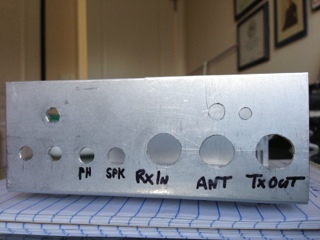 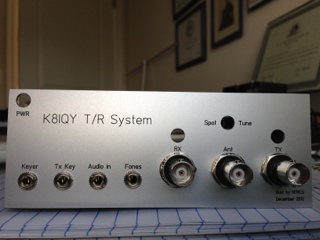 I always look forward to my monthly issue of the K9YA Telepgraph e-zine. There are always interesting articles about ham radio, from radio kits and adventure stories to fascinating stories about amateur radio’s storied past. I don’t know how they always put out such a fine publication, but I’m sure a lot of hard work goes into it. Thanks guys!

The lead story of the February 2013 issue is about an audio filter kit called the Hi-Per-Mite, designed by David Cripe – NM0S – and the 4SQRP Club. While the project was pretty cool itself, what caught my attention was the way the designers created the kit’s front panel. They used a slick piece of freeware called Front Design provided by an online service called Front Panel Express.

What I’ve learned about kit building, especially when the kit provides no enclosure, is that creating the enclosure is no mean feat, especially without proper machine shop tools, like drill presses, brakes, etc. What to do? Front Panel Express offers an excellent option. Simply download their free, and quite sophisticated yet easy to use, software which enables you to design a front panel for your kit (they offer enclosures too).

But, wait, there’s more. Once you’re done designing the panel (actually at any point along the way) you can check pricing, which makes it a cinch to keep costs in line. Once you’re set, you can place your order from right within the application. Very nice!

The front panel I designed for my kit will be made of aluminum. You specify all dimensions (metric or English) and color. You can also specify engraved labels, in choice of fonts and colors! My total cost with shipping: $38.

I placed the order this evening (January 29) and can’t wait to see the finished product.

Back in December, I actually obtained enclosures in an attempt to machine my own front panel. But my results were, let’s just say, disappointing.

Once I receive the custom-designed panel, I’ll post photos so you can see my original work vs. the Front Panel Express product.

In the meantime, check out the K9YA Telegraph and Front Panel Express. I’m glad I did on both counts!

This was my first experience building a kit that came with a circuit board but no enclosure. I learned first-hand how challenging and time-consuming it can be to precisely machine an aluminum enclosure for a kit. In this case the kit provider only suggested a possible enclosure for use with the kit. Fine, except that the builder is left to his own devices when it comes to placement and drilling of holes to accommodate an antenna port as well as connections for power and a key.

I was stumped for a while on how best to implement antenna, power and code key connections until I remembered a Ten-Tec 1340 QRP CW kit I had built in 2010 that resulted in failure (I mistakenly applied power with the polarity reversed and fried unspecified components). Now that failure was about to help solve my challenge of how to set up connections to the circuit board.

From the Ten-Tec kit I removed the strip used to connect power and a key. I also removed the SO-238 antenna connection and at the same time realized the mini RG-174 coax was just what I needed for my antenna hook-up. However, that still left me with the challenge of how to mark the holes I needed to drill in order to mount the power and key connection strip. I decided to simply lay the Ten-Tec enclosure with its pre-drilled holes against my case, then use a marker to indicate where my holes needed to be drilled. Simple!

Once I had the markings in place for the holes I needed to drill I realized I did not have a 5/8 bit to make the hole for the chassis-mounted SO-238 connector. I decided to simply use the largest bit I had (a 1/2″ bit) then use a half-round file to enlarge the hole to the dimension I needed. Buying the 5/8 bit would have cost $15-$20 bucks anyway.)

It worked pretty well. Drilling the holes accurately for the multi-port strip proved more challenging, not because my marking were imprecise but because I did not have a good jig to hold the case steady on the drill press pedestal. For a first effort it came out pretty well, although it won’t win any beauty contest. One other very important thing I learned in machining this case is that this kind of work cannot be done without a good drill press. Using a simple hand drill is simply too hard because it is very difficult to hold the drill bit steady on the marking for each hold. (Hat tip to my brother-in-law, Tom, for the use of his drill press!) That said, I later learned that I should probably have been using a step drill bit.

Now for the acid test. Would the NS-40 work? To this point I had not even fired it up as I had no connections in place for power, antenna or key. So I really had no idea whether it was even going to work or whether the xtals I purchased would work based on the modification I implemented which allows me to switch xtals as needed vs. having a single xtal soldered to the board.

I hooked my 8 AA power supply up to the NS-40, connect my straight key to the rig, fired up my trusty Hallicrafters SX-130 receiver and voila! The NS-40 came through loud and clear.

Completing this project gave me a new appreciation for the skills needed to machine an enclosure for a kit. This may give me the courage to try future projects where part of the challenge is preparing an enclosure for the kit.

Exterior view of the NS-40.

Interior view of NS-40 as seen from the front of the unit.

Side interior view of NS-40.

This turned out to be a very satisfying weekend project. Although I must admit I put in several hours inventorying and organizing all components which made for a very smooth process of “stuffing” the circuit board.

There are images of the finished board
below.

Probably the more challenging part of this kit will be machining the housing for it. The template provided with the kit is not drawn to scale. So I’ll need to make some careful measurements before going to the drill press.

I’m really excited about this unit because it will give me the chance to explore running a separate transmitter and receiver for the first time since my novice days back in the 1960s. Only now, instead of a manual ceramic and copper knife switch to switch between receive and transmit modes, I’ve got this slick solid state device that will make it appear almost as if I am running a transceiver. 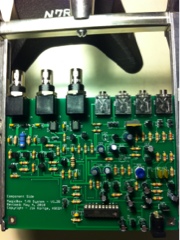 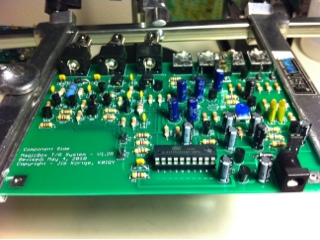 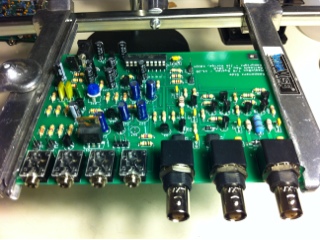 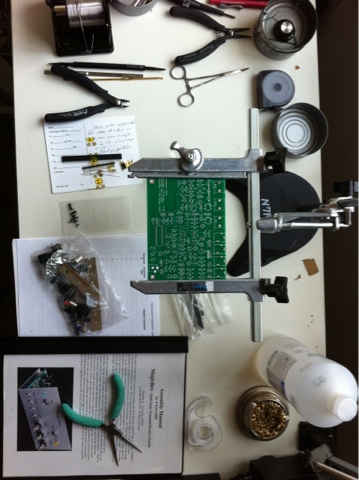 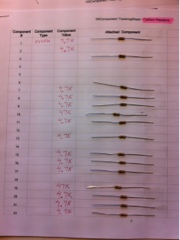 N7RCS
Create a free website or blog at WordPress.com.